In case you haven't been exploring Chicago Poker Club of late, we have a great deal going on.

We've added a new tab for all non-WCPC Fallah Productions shows, and are kicking off our new section with Episode 1 of the 2nd Annual Chad Brown Texas Hold 'Em Championship, which was recently filmed in Jacksonville, Florida.  ChicagoJason worked as a producer on the show, while our friends at Ante Up Magazine, Chris Cosenza and Scott Long host.

We have a brief recap, and a link to some of the best features on the Department of Justice takedown of the three biggest online poker sites.

And finally, Jeff Freeman brings us the latest installment in his Primer Series.

I've been struggling with a label for you. I settled on "Laundry." That is to say: "Laundry doesn't fold itself." If I sound a little bitter in these next few installments, it's because I've lost a few hefty loads of chips to Laundry players in my casual poker playing career.

One point needs to be made clear: Laundry is not a Call Station. Laundry continues to call bets even if the hole cards they're holding are dead in the water. Call Stations at least have the common sense to fold a hand that isn't getting them anywhere.

Laundry players develop in a number of different ways. The simplest, of course, is the Laundry that just doesn't know that much about the game of poker.

Some beginner players, however, turn into Laundry by fixating on a few unimportant developments in the game.

It's impossible to consider an infinite number of possibilities and characters playing out in a hand of poker, so we'll keep it simple. Let's say you find yourself with

hole cards. Someone else throws out a bet you're not comfortable with. You fold your hand. You sit back, joke with a friend, and pick up your beer.

The flop comes down:

. Two pair! The knife of what-could-have-been stabs at your gut.

! Damn it -- a full house! The knife turns, and the cold beer you just swallowed suddenly has a sickly warm feel to it.

The only scenario you play out in your head is what may have transpired had you called a potentially lethal bet from a player somewhere higher up on the rail: "I should've stayed in! I would've had that gigantic pot, and I'd be chip leader. I probably would've even ended up winning the tournament!"

In other words, your fixation on your garbage folded cards blinds you to the action that developed at the table and caused you to fold in the first place.

What you're failing to realize is the disaster that could've befallen you. Dedicating a portion of your chips to a set of hole cards that are better off balancing out a rickety restaurant table is a slippery slope. You really, really want a hand to develop, but other players are forcing you to contribute more chips to the pot for the minuscule chance that your hope is actually realized.

So, you end up playing crap cards for a slim chance of striking it rich. You remain completely oblivious to the bets coming your way. You remain entirely ignorant to hands other players may be betting on. You fail to draw even the simplest correlations between the big bets and a developing table. All you want is a 6 to at least pair your hand on the river (while ignoring the size of the bets and the flush draw already on the table)!

As developing your playing style goes, it's very dangerous to ignore what you did right in order to fixate on what could have been. You may pull down a monster pot or two (and it will likely be at my expense), but the reality is that you're eventually going to make a very charitable contribution to your opponents' stacks.

Instead, consider the big picture. Was your fold really a bad decision? What hand could you have hoped for in holding

? There was a very slim chance your hole cards were going to develop into the monster that eventually played out. The correct decision shouldn't be second-guessed when you're faced with another two unimportant hole cards.

Don't dig yourself into a hole. You don't have to know poker odds to understand the sinking feeling in your gut every time you make a call means you should've folded a long time ago!

As this author was heading back from a week away, playing some poker in International waters, and visiting the Bahamas, a country where citizens may play poker online if they like, the DOJ back in the U.S.A. was taking down the Big 3 of online poker sites - Pokerstars, Full Tilt Poker, and Ultimate Bet.  If you're on a U.S. IP, and visit one of the websites of these online poker houses, you'll just see the following image, as their primary domains as been seized by the FBI as a part of the crackdown: 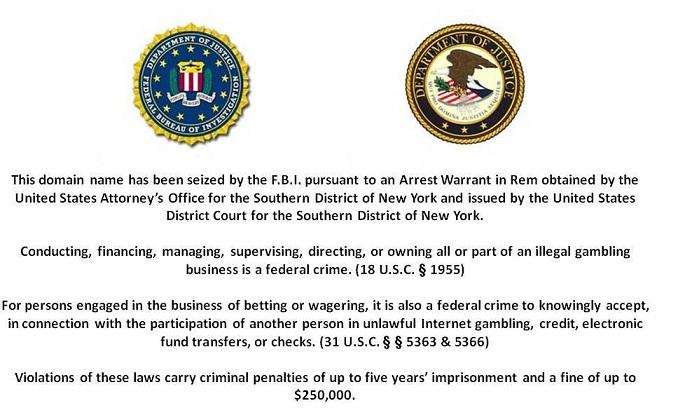 High stakes pros and young 21 year-old grinders may have a multitude of options before them, but others don’t really have any options at all. Devin Porter is a 27 year-old poker pro from Utah who actually converted from being a live pro to an online grinder so he could stay home and spend more time with his wife and two-year old son. For six years, he has paid his bills, supported his family, and played full time. Now, he doesn’t see much of a way he can continue living the life he’s made for himself.

There is plenty of solid coverage of the event out there, so we at Chicago Poker Club have opted to be the source of the source.

There's lots more out there to read, but this will get you started.