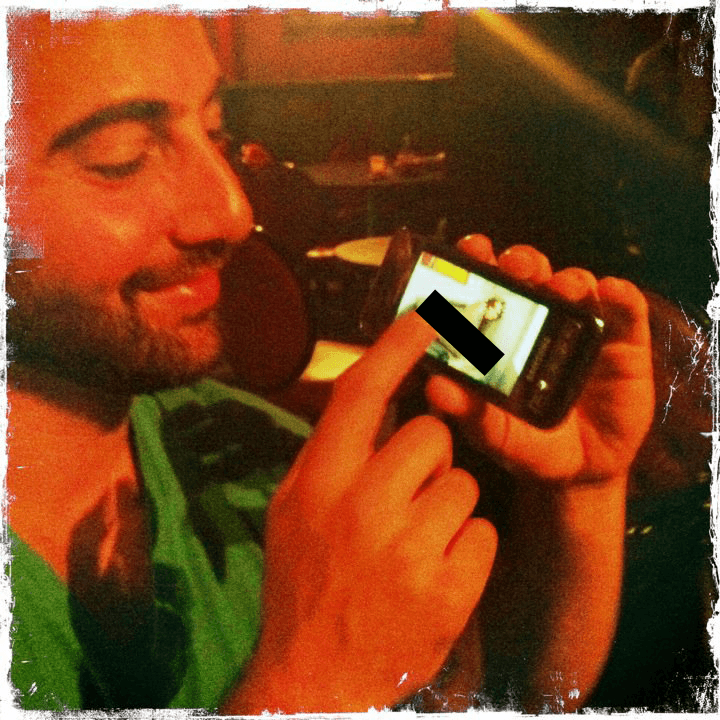 This ended up becoming irrelevant in the end.  First I flat a raise to 75 at the 25-25 level with AA in the hijack, hoping to induce DeMaci on the button to 3bet… he folds and so do the blinds so were heads up to the flop.  965- 2 spades… he bets, I raise, he raises, I raise, he jams, I snap, he has 99 for top set…. NO PROBLEM.  I’m left with like 350 and to add insult to injury… I get it in against Bonomo with A9 against his A7 and he rivers a 7 like a champion.  Good players get there I guess.

This tourney left me stinging.  I was really proud of myself for the way I played this one.  I was at 2 incredibly tough tables the entire day and I had to adjust my entire game in order to survive.  I am usually very aggressive, sometimes psychotic (ok… lots of times psychotic), but I was unable to effectively play that way.  I had to adjust, the players were very good, very aggressive, and their stacks were deep from popping all the fish in the early levels.  The only way I could survive was to play tight.  I ended up playing what I believe is one of the most disciplined days of tournament poker I have ever played.  Anyways, I get up to 10,500 after dinner break.  With the blinds at 150-300 it folds to me on the button, I raise it to 775 w AJ, the small blind raises to 2100, big blind folds, I pile him, he calls with 88 and of course holds.  We count down the stacks and he has me covered by 25 chips… That’s poker folks.

So I’m not off to the best start but I still have a lot of chances moving forward, including the $10,000 world championship at the end of the summer.  My next tourney is a Venetian $1600 on Thursday… I think I’m gonna try to win it. We haven’t gone out that much the last week because of all the tourneys.  There have been a few funny things that have happened though.  One night we went to dinner at Rumor and then out to karaoke afterward.  While at dinner, a 60 year old toothless busboy approached our table.  A friend of ours happens to hire talent and he wants to show her what he’s got.  He proceeds to bust out one of the best Michael Jackson impressions I have ever seen.  We really liked this guy..  Shortly after, our friend Courtney screams “girls are here!!!” She is referring to their 6 gay friends that are joining us for this dinner.  The funny thing about it was they were all identical!  All of them had v-neck t shirts, perfect bronzed skin, perfect smiles (all of them whiter than Mario Lopez teeth), and the EXACT SAME HAIRCUT.  I’m telling u, when 6 consecutive people show up with the exact same haircut it is hard not to laugh…  Fohawk with the short spiky sides, sideburns all the same length and the same stupid rattail in the back.  Me and Ralph had some good inside jokes.  After dinner we part ways with the clones and go to a karaoke bar.  This place was epic.  I haven’t seen so many starving artists since leaving the wicker park/ bucktown area of Chicago.  Every singer was a karaoke champion, with every act out performing the last.  At the bar my brother found some guys phone and brought it back to the table.  He opens the phone and started cracking up.  The first thing that pops up is this guy’s favorites page.  On it are 16 nasty, naked, raunchy pictures of “his” girls.  Each of them had a name; boo boo, kat, crystal, lil’ sexy, dawn…  Ralph thinks that this guy is a pimp for sure.  However, upon further investigation, we see that it is the phone of a fat nasty vegas hillbilly, who could never get a girl let alone the types of girls that were in his phone.  This was confirmed after we went thru his text messages.  He obviously set up this page on his phone so he could brag to his friends about the life he pretends to live.  We return the phone to the bar and savor the sweet memories (there is a pic of me pointing at the guy’s phone on my fb wall, u can see the pic of the girl on the screen… its funny).

Some more stuff happened but I am not trying to write a novel here.  I will try to be more consistent with my blogging and attempt to write 3 every week.  I will also try and win poker tournaments.   We’re moving forward…  As jigga said, “on to the next one… “