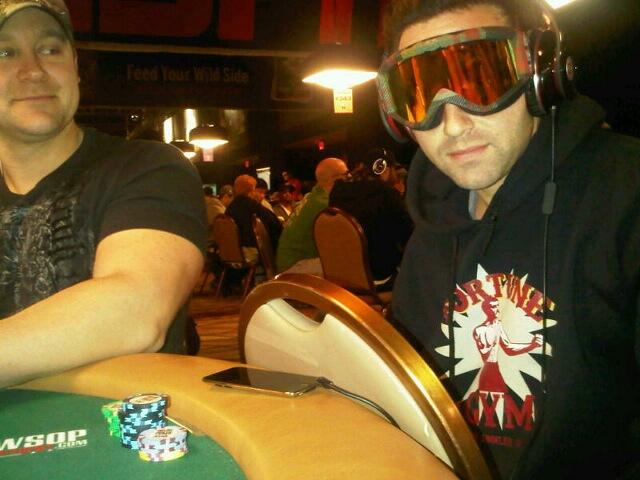 Anyways, of course I can’t take advantage of this table because the deck decided to be cruel again.   At 75-150 three players limp in, I complete from the small blind with K7 and the big blind checks.  The flop is KQ5 rainbow… I check and it checks around to the button who bets 500… I call and everyone else folds.  The turn is a 7 giving me 2 pair… I bet 1000 with 2400 behind and he calls (at this point I put him on a king, and assume the only hand he could possibly have that bats me is 55).  River is an A, adding J10 as 1 of 2 hands that’s beats me now.  I go allin and he snap calls and pops out his chair as he flips over J10 for a straight.  Drowned on the river again.

Another good table draw for me.  Outside of Shane Shleger, everybody at my table seems soft and exploitable.  I am sitting on Shane’s direct right so I have position on him.  My table most likely will not break the whole day so I’m very happy with my seat.  It is a shame I couldn’t sit in it longer.  At the 75-150 level I have just under a 3k starting stack… It folds to me in the small blind.  I look down at 77 and jam, the old man in big blind has 3300 chips… he snaps calls me….  With A9 offsuit… and flops an A.  I was told I could have played the hand different but I am very content with getting it in there.  I just can’t beat the deck so far this summer… Things gotta turn around.

Outside of poker life continues to be great out here, and a few more funny things have happened…

So that’s the bulk of my activities this week.  I still need to find my groove at the tables, and am still looking for that elusive opportunity to get my shot.  It will come; I will continue to be patient and will continue to stay disciplined on this trip.  A lot more fish to fry… and a lot more mops to pop.