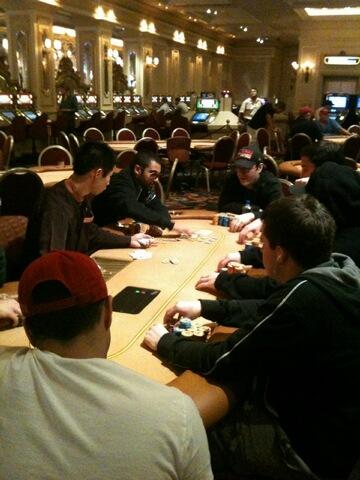 At the 2nd break I have about 6500 of a 20k starting stack.  The blinds are going to 150-300 and I have just been moved to a new table with 2006 WSOP Main Event Champion Jamie Gold.  Wow, I really don’t like the fact that I referred to him as that… Anyways, the very first hand after break he raises to 1000 from the highjack and it folds to me in the big blind.  I look down at 99 and ship it in for 6500.  I stay very still and keep a blank stare on my face, he looks up at me and makes eye contact with me… I refuse to break eye contact with him.  He then says, “Why do you have that creepy look on your face?  You know what ,I call… I don’t like the way you are staring at me.”  He shows the Q8 of clubs, which amounts to a terrible call.  My 99 hold up and I double up to 13,500.  “Thank you Mr. Gold, you are a sweet prince” I say as I rake in my new found chips.  He replies, “I just didn’t like the way you were looking at me so I called… I was actually hoping you had Kings” suggesting that he hated my stare so much that he wanted to put as horrible a beat on me as possible.  THAT’S STRONG POKER JAMIE.  About an hour later we are at it again.  I am up to roughly 20k after a series of pots won without showdown.  A player from early position limps and I raise with QQ, 3 people call including Jamie and the original limper.  We all see a flop of AQA (yeasssss!!).  I flop a full house and am pretty sure that someone has an Ace here.  Assuming this to be true I bet right out with it, electing not to slow play, and trying to inflate the pot as quickly as possible.  Jamie raises, the limper calls, and I call after tanking a bit.  The turn is a 3 which changes nothing.  I make a very small bet to induce this maniac into making a move, and what a move it was…. He grabs two handfuls of chips and jams them into the pot putting everyone all in.  The other kid folds and I snap call with queens full.  He has A6 as suspected and does not improve on the river.  “Why did you do that Jamie?? I didn’t even stare at you this time!” I say to him as I rake in my pot.  “I have to play my hand, my hand is too good to fold” he replies.  I smile at him and simply say “I understand” in a very condescending way.  Zooooooooooooom!!!! I’m up to 44,000 and am now in a position to make a deep run.

I make it to the end of day 1 with 93,900 in chips which is right at the average.  There are 68 players remaining from a field of 353.  36 players will make the money and first place is $122,000.  I feel great and go home to get some much needed rest.  We come back the next day at 2pm and get right back to it.  I am playing very aggressively and feel as if I am outplaying my whole table which has both Jamie Gold and Ty Reiman at it (although I never played a hand with Ty).  Staying aggressive, I raise with 44 from the cutoff, a standard play.  The kid on the button then raises me, which I kind of expected considering I raised the cutoff like ¾ times so far (We both have roughly the same stack).  I think for like 30 seconds and move all in… he snap calls me and flips over AQ… I win my first race of the summer!!! I’m up to 175,000 and am feeling great.

There is a kid on my right named Jason who plays very good, is very aggressive, and is a very accomplished online pro.  The last 2 times he has been on the button it has folded to him, he raises, I 3 bet from the small blind putting him on a button steal, and he folds.  Here we go again… The very next time he has the button I immediately look at my hand as soon as it is dealt and see the AK (yeassss). It folds to him, he raises, and I 3 bet from the small blind  for the third time in a row(I’m very excited because I know he is sick of me doing this and I assume he’s gonna take a stand).  He takes the bait and moves allin for 90k and I snap him off.  He tells me I’m good as he flips over the A4.  I have him crushed with AK and am in great shape to have like 270k and a top 3 chip stack.  Flop is good, turn is great, river is a 4…. Fml fml fml fml fml.  I owned this kid’s soul and once again I get brutalized by the deck.  I’m left with 85k which is among the short stacks.  The money bubble burst at 36 players and the action picks up.  With nothing to lose and everything to gain I play like a reckless psycho, going all in over 10 times in spots where I never had a hand (I had KQ once) because it was probable that the players left would fold.  I was able to grind away for 2 more hours, surviving and never having to show my hand.  My luck finally ran out though… It folded to me on the button (I am most likely jamming and 2 cards here) and I go all in with 68 of hearts (which looks like the nuts for a 12 big blind button jam).  The small blind wakes up with KK and holds up.  Oh well, it was a very good run.
I finish in 21st place and cash for $4300.  Not my goal obviously but I am proud of myself and am happy to get on the board with my first cash of the summer.  I played great and cannot point out any mistakes that I made.  If the kid didn’t stick that 4 up my ass on the river I would have been a very tough player to beat and would have made a serious run.  That’s poker, and I’m cool with it.  This should give me some good momentum and confidence for future tournaments.

I am coming back to Chicago tonight for 4 days.  Tomorrow is my birthday and Saturday is my friend Gina’s wedding.  I plan on going out on Thursday and Friday night, wedding on Saturday, back to Vegas Sunday night.  If anyone wants to come out for my birthday this weekend hit me up and I’ll let you know what’s up.  Until next time…………