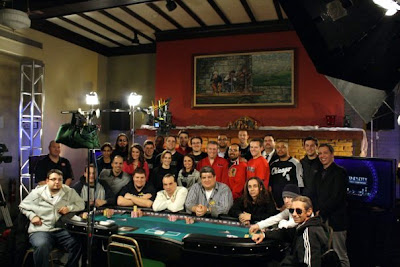 Main Event Charity Games and Windy City Poker Championship teamed up to throw the biggest poker party in Chicago history. On Friday and Saturday, December 18 & 19, 2009, 180 tournament players, and a host of cash game players, spectators, and sponsors made history at the Irish American Heritage Center, raising funds for two worthy charities in the process.

The tournament kicked off at about 8pm on Friday, after tournament organizers scrambled to accommodate their largest field to date. The play went until 1AM, when the 140 remaining players bagged their chips, and headed home for the night. Play resumed at noon on Saturday. 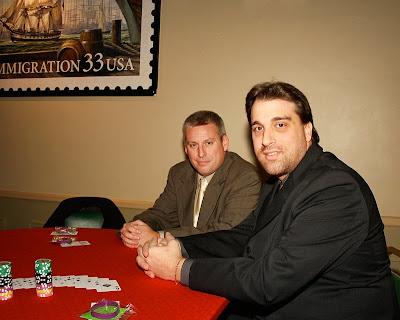 The publishers of Ante Up, Florida's Poker Magazine, Chris Cosenza and Scott Long were on hand to kick off the event and handle emcee duties. They could be seen throughout the event representing their business, and playing plenty of Chinese Poker and mixed cash games.

The television crew at Windy City Poker Championship, of which this author is affiliated, did an incredible job of converting the lounge area of the facility into a TV set, home to the "featured table", and when the field was down to 8, the Final Table.

When the next few levels brought a host of bust-outs, the organizers returned the structure back to normal, having made up the one hour via 10-minutes off of three levels, and the removal of one, single 30-minute level. The event was back on course. 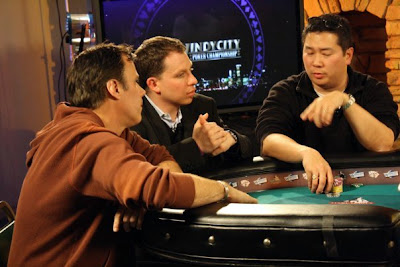 I had the good fortune of playing between Roeper and Lee at the featured table on Day One (at left).

Day Two saw the field shrink from 140 remaining players down to 20 when the tournament went "hand-for-hand". Some players tightened up, trying to eek their way into the payouts which were awarded to the top 18 finishers. About five hands in to hand-for-hand the field narrowed to 19, and the then three hands later, the field celebrated making it into the money.

The event played with two balanced tables until this author (yeah, me!) found Ah Qc at our five-handed table. With a reputation for being a loose, aggressive player, and only 9 big blinds remaining, I happily shoved all of my chips to the middle. The player immediately to my left, on the button promptly called, and when the blinds folded, showed me two Kings. My hand did not improve, and the remaining players combined to a single table. 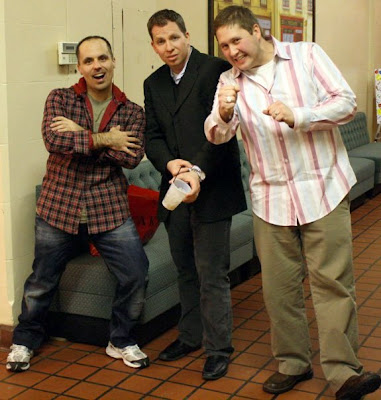 After a battery of player interviews, television preparation, and several introductory takes and re-takes featuring WCPC hosts Kirk Fallah and this column's author, the televised final table was under way. The players competed for over two hours, until an eventual champion was crowned.

The event will be televised on Chicago's Comcast Sports Net and Florida's Bright House Network in late February/early March 2010.