An Omaha Conundrum - Flop the Nuts, a Set of Aces, and Have 31% Equity!

This post was originally featured on Chicago Poker Club on March 7, 2009. 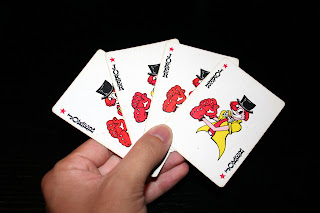 Ferret and I were just talking Pot Limit Omaha post-flop and I was musing about the sort of trouble you can get into with top set on a semi-connected board. One situation we considered was flopping top pair with second set, making it unlikely your opponent has top set. Another is flopping top set against two opponents - its good on the flop, and yet you have less than 33% equity in the hand.

Both situations are employed in this example.

Ferret is in the big blind, Gramps is in middle position, Scotty is on the button.

Gramps is well behaved today, and just limps in with his 5h 7s 8h 9s.

Scotty wakes up on the button with Aces, and another Broadway card which is suited. Ah Ac Qd 2d. He raises pot.

Wil folds the small blind and Ferret finds 6s Ad Td 6d. He has a suited Ace, two Broadway cards, and a small pair. He knows Gramps will call, so he figures he’ll take a flop.

The flop is 4s 6h As. Ferret flopped second set. He also believes Scotty will continuation bet, representing Aces, but thinks it is unlikely he has them, since Ferret holds an Ace himself. He checks.

Scotty bets full pot, protecting his flopped top set. Ferret believes he has trapped his opponent, and re-raises the full amount of the pot.

Gramps is now getting sickening pot odds, and has a full pot-sized bet remaining. He believes the numbers support getting it all in and he does. Scotty has the nuts, and calls off his remaining chips. Ferret feels he’s committed, and believes he may be wrong about Scotty’s holdings, but knows he’s capable of having a wrap here as well. He calls off the remainder of his chips.

Who is in good shape? Scotty doesn't know...

Twodimes.net says the players have the following pot equity:

Interestingly, the set of Aces, currently the nuts, have only 31%, while the wrap and two live flush draws have nearly 63% equity! The small mammal is in mammal jail, drawing to the case 6 for quads.