The top 4 players finished in the money. Tony Kroll would take home first place valued at $720 which included a $100 seat to our May Championship Event. "Chicago Joe" would finish in second place taking home $420. Harry Mohebbi finished in 3rd for $295, and John Castillo finished in 4th for $220. 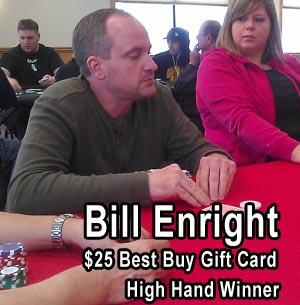 Bill Enright held the High Hand during our noon event with a Full House 4's over 6's. That events High Hand promotion awarded a $25 Best Buy gift card to Bill.

Not too long after the start of the noon event...the $1/$2 cash games got up and running with monster pots all event! One such hand included three players ALL-IN on the flop where player #1 (David) held a Set of Aces, player #2 (Agnes) held a set of 2's, and player #3 (Ken - Agnes' Husband) held a straight flush draw. The river would complete a 5 high straight for player #3 (Ken) taking down the pot!

The nightly 7pm $40 deep stack tournament ran with 26 entries. Players included Terry Fallah (The Bubble Boy), David Evans III, and newcomer Mark Baggett who was on his knees praying for his hand to hold up while ALL-IN!!! His hand would hold up and Mark not only took down the pot, but finished in first place taking home $380. This nightly tournament gives players 12,000 in starting chips and a slow structure.

The weather will NOT stop us from having great charity poker events! We will continue this Sunday February 16th at Durbins in Tinley Park. We apparently have much nicer weather in store for that event...so come on out and have a great time!